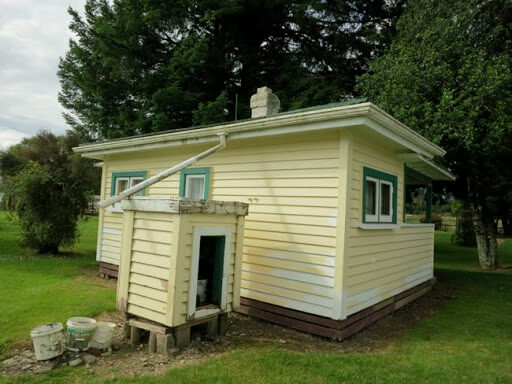 History and culture – Visit Jack’s Mill School at Kotuku (30 minutes via Lake Brunner road) one of the quirkiest sites on the West Coast, a historic miniature bungalow designed, built and furnished entirely by the Kotuku school children aged 10-12 years.

The Kotuku school was opened c1909 in the small saw-milling settlement. Little distinguished it from any other rural school until 1935 when Edward Darracott was appointed headmaster. He was an advocate of a new approach to education in New Zealand, which emphasised experiential learning tailored to the needs of individual children.

Considered revolutionary, Darracott gave his students hands on projects to teach them practical skills that would equip them for adult life. Making over the school’s garden was the first task.

Once the garden was complete, Darracott’s philosophy of experiential learning was realised on a much more ambitious scale when he led a group of 10-12 year old students to design, build and furnish a small bungalow, built to three quarter size. Students were involved in all aspects of its construction. They even sourced three quarter size interior appliances including a bath tub, hot water cylinder, stove, kitchen sink and kitchen units.

When finished the bungalow was fully functional, complete with electricity and running water. It was used as the home economics room until the close of the school in 1955.

.
On Sundays the buildings are open to visitors from 2-5 pm (entry by donation).
Throughout the rest of the week visitors can inspect the grounds during daylight hours.
Tours can be arranged; contact the Kotuku Heritage Society on +64 3 738 0049 or email kotukuheritage@gmail.com.