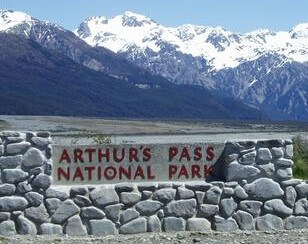 Arthurs Pass – The township and the pass are named after Sir Arthur Dudley Dobson (1841–1934). Arthur Dobson had been tasked by the Chief Surveyor, Thomas Cass, to find out if there was an available pass out of the Waimakariri watershed into valleys running to the West Coast. In 1864, his brother Edward joined him and accompanied him into the valley of the Otira River. A West Coast Māori Chief, Tarapuhi, told Arthur of a pass that Māori hunting parties occasionally used. When Arthur returned to Christchurch, he sketched the country he had traversed and included it in a report to Cass. Arthur Dobson did not name the pass, which he found very steep on the western side.

Dobson named the site that became the township “Camping Flat”.

When the West Coast Gold Rush began in 1864, a committee of businessmen offered a £200 prize for anyone who would find a better or more suitable pass from Canterbury over the Southern Alps to West Canterbury (the West Coast). At the same time George Dobson, (another brother), was sent to examine every available pass between the watershed of the Taramakau, Waimakariri, and the Hurunui. After examining passes at the head of every valley he reported that “Arthur’s” pass was by far the most suitable for the direct crossing and the name stuck.

Arthur’s Pass, climbing to more than 900 metres through Arthur’s Pass National Park, is the highest and most spectacular pass across the Southern Alps.

If you’re travelling from Canterbury to the West Coast, this is the road to take. It is a piece of extreme engineering involving viaducts, bridges, rock shelters and waterfalls redirected into chutes.

Arthur’s Pass National Park itself is a landscape of two halves. On the eastern side, you’ll see wide, shingle-filled riverbeds and vast swathes of beech forest. Descending the western side and you venture through dense rainforest alongside and over deeply gorged rivers. From our Park you will be able to watch the Trans Alpine Train cross the Mighty Taramakau River.

If you’re feeling adventurous, go hiking, mountaineering or even take in the more gentle Arthurs Pass village walks, here you are spoilt for choice. You’ll probably spot New Zealand’s inquisitive and comical alpine parrot, the Kea, along the way and during winter you can join the lucky skiers and snowboarders enjoying spectacular runs in the Temple Basin Ski Area approx a 20min drive from Jackson’s Retreat.